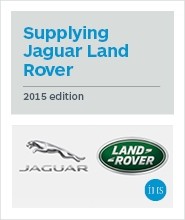 This report takes a look at Jaguar Land Rover's recent model performance and its plans for global expansion, including an in-depth interview with Dave Allen, Purchasing Director, and Michael Mychajluk, Supply Chain & External Engagement Manager for Jaguar Land Rover. The report also looks at the current manufacturing sites based in the United Kingdom, a look at the purchasing function, access to finance in the UK, and near-term production forecasts for the group. In addition, there is analysis of the company's relationship with its suppliers, its forward model program, and details of parts supplied to five Jaguar Land Rover models from our Who-Supplies-Whom database.

Jaguar Land Rover is one of the most significant successes in recent UK automotive industry history. Having spent several years as independent brands within Ford, BMW and others before this, it is now becoming a significant player in the growing premium segments in Europe, North America, China and other emerging markets. The process of transformation from a pair of quaint but somewhat peripheral brands in a global sense into fully-fledged competitors to BMW, Audi and Mercedes, may have some way to go, but there is no doubt about the direction in which the company is heading.
Having been focused on the UK for most of its history, at least until recently,

JLR is in the fortunate position of having to address the problem of a lack of capacity in its existing UK facilities to meet its long-term growth ambitions. This contrasts with the situation at many volumes manufacturers who suffer from excess capacity and under-utilised plants. JLR’s Solihull and Halewood facilities are said to be fully utilised at present, although some additional capacity could well be generated there in the future. Meanwhile, Castle Bromwich, which had once been one of the most under-utilised plants in Europe, is now subject to a major investment in its body-shop facilities in particular. This will allow vehicles on the new D7a aluminium platform to be made at Castle Bromwich, integrating the plant with the Solihull network (hitherto these plants had operated in quite distinctive niches). Depending on shift patterns and line speeds, this factory could well produce 2.5x or even 3x current production volumes.

Jaguar Land Rover will spend in the region of UK£6bn in the UK alone in FY2013/14, with the expectation that this amount will grow by a further 50% by 2017. This will create significant new opportunities for suppliers located in the UK as the company looks to simplify its long distance supply chains and reduce the environmental impact of its purchasing operations’ footprint.

A Supplier’s View: Interview with The Autins Group

SuRe by company size