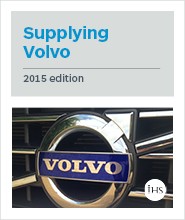 The report also looks at the company’s current manufacturing sites based in Sweden, its future production strategy for China, the relationship with parent company Geely,  and looks at OEM-supplier relations. The report is backed up with IHS Automotive production forecasts for the Volvo brand; the industry standard for automotive forecasting and analysis.

Volvo is both one of the most iconic and best-known Swedish brands and also the last remaining Swedish car company, following the demise of Saab. It is now owned by Geely of China, and although a relatively small company, compared to automotive giants such as VW, GM and Toyota, it is nonetheless now on a growth trajectory and in the process of establishing a global manufacturing network.  In addition to its long-established factories in Sweden and Belgium, it now also has two new vehicle plants in China and an engine plant there too.The company has confirmed it will build a factory in the USA in the near future as well.

Volvo’s brand recognition derives in large part from its reputation for leading-edge safety technology and environmental compliance. It has long been seen, especially in the US, UK and some continental European markets, as the supplier of the archetypal middle class family car, especially its estate models. The advent of the original XC90 SUV and the subsequent smaller XC60 changed the company’s overall image somewhat, but the focus on safety remained paramount. In China, Geely wants to emphasise the premium nature of its vehicles, and with the growth of the Chinese market, especially for premium vehicles, there is every likelihood that the Chinese influence on Volvo’s future direction will increase.

Last year, Volvo’s global retail sales rose to nearly 467,000 units, rising from nearly 428,000 in 2013. Although production is growing in Europe and now in China, Volvo remains a relatively small player at under 500,000 units a year.  It is planning to raise its annual production volume to over 800,000 units and possibly more once the North American plant is confirmed. As part of the Ford Premier Automotive Group (1999-2010), Volvo had benefited from the scale benefits from Ford’s global purchasing power and also a wide potential source of engines.  Operating as an independent player,  and even with Geely’s  backing, Volvo has been on a process of re-inventing itself in many key areas, including increasing its manufacturing footprint, developing its own four-cylinder engines, and reorganising and expanding its purchasing department for example; the purchasing function had been subsumed within Ford Purchasing under Ford’s ownership, with a large number of key functions, especially cost analysis and estimating, having been transferred to Ford, reducing Volvo’s own capabilities in the area.

SPA
SPA models could represent as much as two-thirds of Volvo output, and possibly more
Europe and China will adopt the same manufacturing systems
90 cluster models will be at the heart of the new Volvo