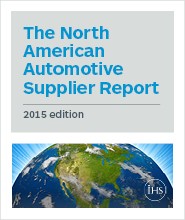 In 2014 North America got back to the 19 million mark around which it floated between 2000 and 2008, when the financial crisis resulted in a collapse of the local market which bottomed out in 2009 at 12.6 million units. The 33% drop in volumes to 12.6 million experienced between 2007 and 2009 represented a significant shock for a region accustomed to annual light vehicle sales volumes of around 19 million.

This shock spurred an overhaul of carmakers’ business models as well as their corporate structures. Therefore, the North American market and, in particular, the US one which accounts for about 80% of the regional sales, approaches the 19-million unit mark under different underlying fundamentals. Significant chunks of excess capacity have been cut at several automotive plants in North America, leading to the end of unhealthy over-discounting in order to secure line saturation and reduce imbalances in inventories.

Back in 2006, incentives of various forms amounted to about a 30% discount on the MSRP (manufacturer’s suggested retail price) for SUVs and pick-up trucks. OEMs operating in North America are much more cautious about their inventory levels as they strive to achieve profitable unit sales rather than purely maintaining market share at all costs. Cash incentives were in the region of USD2,100 to 2,500 in 2011 and 2012, nearly halved from their mid-2000s levels, entailing higher profitability as average transaction prices have also increased.

This report looks at the IHS Automotive sales and production data for North America; OEM activity and supplier management; recent developments within the supply base; profitability, revenue and costs outlook; and the capital spending and investment momentum of suppliers

The report concludes with over 160 supplier profiles from companies both based in the region and those with a significant presence in North America.

Economics of the automotive industry in North America

Automotive industry’s contribution to the economy

Overview of OEMs’ activity and their supply base management

Vehicle recalls a new battleground between OEMs and suppliers

Recent Developments and outlook for the North American supply base