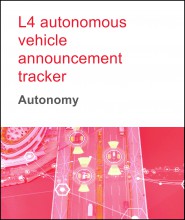 The third version of this tracker covers the level 4 autonomous vehicle announcements for Mainland China and the European market along with updates for the North American market as well. This tracker will be reiterative with subsequent versions covering announcements from other key deployment regions/countries.