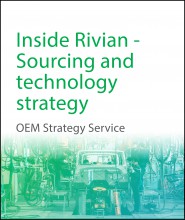 Inside Rivian - Sourcing and technology strategy

Rivian is a new electric vehicle (EV) company, following in the footsteps of Tesla. Similar with Tesla and other new entrants, such as Lucid and Fisker, Rivian has no legacy of internal combustion engine (ICE) and conventional transmission vehicles and existing production capacity to convert for the new world of EVs.

It was founded in 2009, as Mainstream Motors, by CEO RJ Scaringe. The name Rivian derives from the Indian River in Florida. Its first prototype appeared in 2011, a sporty coupé, but this project was soon scrapped in favor of sport utility vehicles (SUVs), pickups, and delivery vans.

Sufficient funding had been raised by 2015 to allow Rivian to run research centres in California and Michigan. It subsequently acquired the former Mitsubishi factory at Normal, Illinois, in 2017, receiving significant tax breaks and rebates as part of the plan to restore vehicle manufacturing there. By 2018, prototypes of the R1T pickup and the R1S SUV had appeared; production was due to begin in 2020.