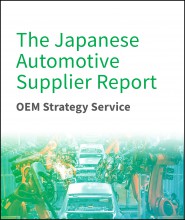 All these disasters created various levels of vehicle production and supply chain disruptions. With external factors also playing a role, such as the economic slowdown in key export markets and trade friction with major trading partners, vehicle production in Japan has remained below the 10 million mark since 2009.

Looking for growth outside of Japan

Recent developments & outlook for the Japanese supply base