While the agreement with Umicore helps Volkswagen (VW) secure critical battery material supplies and establish a circular economy to achieve its sustainability goals in the long term, we estimate that as part of the deal Umicore could supply bulk materials for nickel-manganese-cobalt or NMC-based EV batteries to VW for battery-electric vehicle (BEV) production in Europe 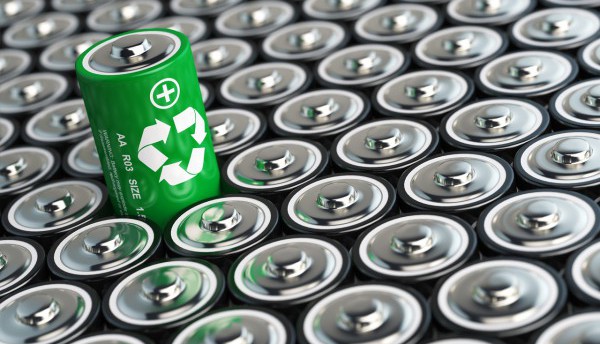 On 26 September 2022, Europe’s largest carmaker Volkswagen Group’s newly established battery company PowerCo and Brussels-based material supplier Umicore announced setting up a joint venture (JV) for precursor and cathode material production in Europe, starting from 2025. The landmark agreement with Umicore is expected to be critical for VW, which has two major long-term milestones to achieve: prepare for the European Union’s regulatory requirement of allowing sale of only zero-carbon-emission vehicles and become carbon neutral by 2050.

The JV plans to invest EUR3 billion in setting up the operations to produce cathode material and their precursors that will be supplied to PowerCo's European battery cell factories. The two companies have not finalized the production site yet and are expected to do so soon.

Meanwhile, on the back of material supplies from the Umicore JV, VW’s battery arm aims to achieve an annual production capacity of 40 GWh in 2026 in Salzgitter. Both partners aim to grow the JV’s annual material production capacity to 160 GWh per year by end-2030, based on the market demand by then. VW estimates that 160 GWh cell capacity per year can support production of about 2.2 million fully electric vehicles or BEVs.

The Umicore deal will contribute to VW’s overarching plan of building six gigafactories in Europe, providing a total battery production capacity of about 240 GWh by 2030. Therefore, the PowerCo-Umicore JV is also expected to significantly contribute to VW’s ongoing transition through the decade, wherein the carmaker aims to have pure EVs contribute at least 70% of its vehicle sales in Europe by 2030.

Under the terms of the agreement signed by the two companies on Monday, both partners will jointly control the JV and will equally share costs, investments, revenues, and profits. “The JV will give both partners a significant first-mover advantage in the fast-growing e-mobility market in Europe,” the two companies said in a joint statement earlier this week.

Securing adequate supply of cathode active materials (CAM) is crucial for a successful transition to electric mobility. It not only is the key technological lever for battery performance, it also is the single biggest contributor to the overall battery cost. According to Thomas Schmall, group board member for Technology at Volkswagen AG and chairperson of the Supervisory Board of PowerCo SE, the cathode material accounts for roughly 50% of the overall battery cell cost.

In addition to that, the long-term sourcing agreement with Umicore will also take into account its responsible material sourcing practices and subsequent impact on VW’s overall carbon reduction in production and supply chain operations. That said, the two companies also plan to work jointly on material refining and battery recycling at a later stage, based on Umicore’s know-how, which besides securing critical materials from used EV batteries, will further cut down carbon emissions from VW’s supply chains. Umicore’s know-how and IP will be made available to the JV with VW through a license agreement.

“The partnership will provide PowerCo, at significant scale, with secure and cost-competitive access to Umicore’s innovative, sustainably sourced and tailored high-performance battery materials for its unified cell strategy in Europe. It will allow PowerCo to benefit from Umicore’s proven production capabilities as well as from its upstream expertise,” the companies said in their joint statement, further adding that the JV is designed to meet both partners’ profitability and return criteria and will unlock each side’s significant synergies and economies of scale.

Commenting on the agreement with Umicore, Frank Blome, CEO at PowerCo said, “The availability, cost and technical performance of battery cells are key requirements for the successful ramp-up of e-mobility. By building up substantial production capacities, we are securing the rapidly growing demand for battery-grade materials for our main customer Volkswagen AG in terms of volume and at optimal cost."

A logical choice. How will Umicore deliver?

The plan to establish a large-scale supply chain for sustainable battery materials for VW secures access to a significant pie of the overall European demand for EV cathode materials as the PowerCo-Umicore JV will cover a large part of the supply for VW’s planned six gigafactories in Europe.

“This partnership further strengthens and diversifies our exposure to a major player in the EV value chain and marks an important step in the execution of its strategy to set-up value creative partnerships across the battery value,” Mathias Miedreich, CEO, Umicore, said, further adding that the deal with VW is in tandem with his company’s strategy to establish sustainable, industrial-scale, closed-loop battery materials value chains in key regions, including Europe.

“We are supporting our customers on their path to electrification right from the start and are very pleased to partner with PowerCo and support Volkswagen in their fast transformation towards sustainable electric mobility.”

Umicore, which inaugurated its carbon-neutral production facility last week for cathode active materials for EVs in Nysa, Poland, had announced its new strategy ‘Umicore 2030 – RISE’ earlier in June 2022, which defined the company’s ambitions to set up a worldwide capacity of more than 400 GWh by 2030. The plan entails the execution of Umicore’s larger strategy that relies on rapidly scaling up production capacity by establishing fully integrated regional battery material value chains in three continents.

Umicore, which plans to build upon its leadership in clean mobility materials and recycling achieved under its Horizon 2020 strategy, has identified that the automotive megatrends, electrification in particular, could result in tripling its addressable mobility market by 2030. As a result, it aims to move fast to capture a significant share in the rapidly growing global battery materials and material recycling market.

“Umicore’s Rechargeable Battery Materials activity is set to deliver profitable growth by focusing on reinforcing and further growing its footprint in key regions,” the company had said in its official media note in June 2022. The company had disclosed that it plans to establish long-term customer partnerships and further expand its regional CAM footprint in Europe in the near term.

Moreover, its strategy also includes setting up a regional presence in North America across the CAM value chain by the end of 2025, based on the ongoing customer qualifications, the specific strategy point that will steer the company through recently introduced regulatory norms under the Inflation Reduction Act of 2022 (IRA 2022) in the US. Umicore’s battery material production footprint in North America is expected to help the company increasingly capitalize on the opportunity to localize battery supply chain under the US law.

At the same time, Umicore also plans to strengthen its position in Asia through a more diversified customer and platform exposure.

“Enabled by the investments planned over the period, Rechargeable Battery Materials has the ambition to reach adjusted EBITDA margins of approximately 20% in 2030. Umicore is expecting to earn more than its cost of capital shortly after 2026 in this business unit with growing returns thereafter,” the company said in its note three months ago.

Meanwhile, in Europe, the new Nysa-based battery materials production facility alone has the potential to accommodate annual capacity of over 200 GWh, which Umicore estimates can power about 3 million EVs, in the second half of the decade. The plant, which Umicore claims is Europe’s first battery materials gigafactory, is set to have an annual capacity of 20 GWh by end-2023 and 40 GWh in 2024.

According to Ali Adim, senior technical research analyst, IHS Markit, VW has been very proactive in securing its supply of battery by forming JVs and partnerships. While the carmaker plans to produce its battery cells in six gigafactories across Europe that would provide support of 240 GWh in 2030, so far, the company has announced three battery plants – in Sweden, Germany, and Spain, in collaboration with Northvolt and China’s Gotion High-Tech.

On the front of specific battery chemistries, VW is seeking a multichemistry approach. “They intend to have Iron-based chemistry for entry segment, high manganese for volume and NCM for specific solutions. Volkswagen would be able to source the latter two chemistries through the JV with Umicore. The Belgium material company has established a patent cross-license agreement with BASF that covers a broad range of NCM, NCMA and high manganese (HLM) chemistries. However, concerning the low-cost solution, Umicore has been focusing only on high manganese chemistries rather than LFP. This could mean that VW would need a supplier other than Umicore for its LFP cathode active material. Due to China’s monopoly in LFP related materials, a Chinese supplier would be the most likely candidate.” 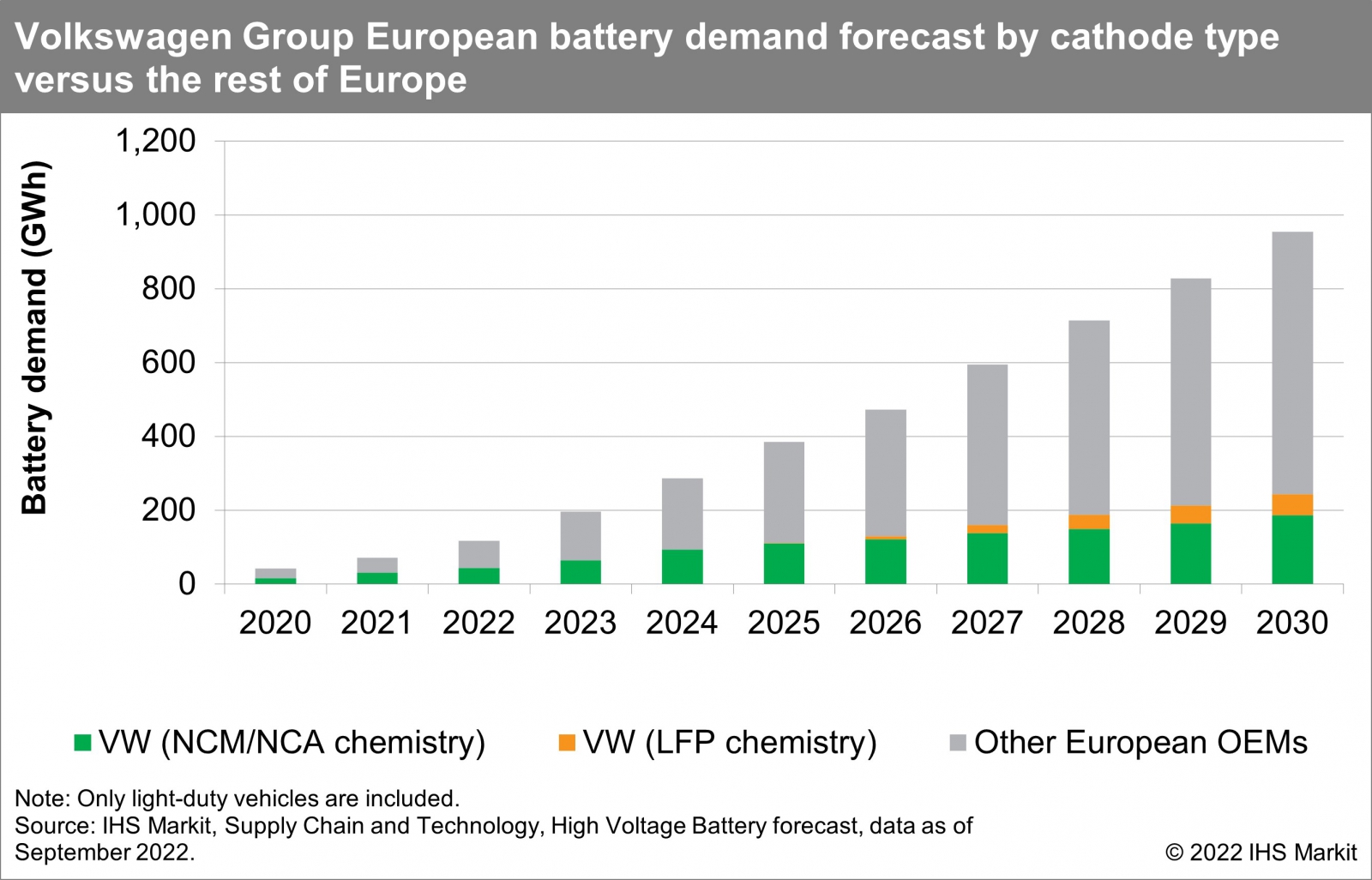 He further added, “Umicore has created in-house production capacity of some of battery raw materials. They acquired the cobalt refining facility from Freeport in 2019. This Finnish plant which is one of the largest cobalt refineries outside China, together with the adjacent precursor facility, feed into the Nysa cathode active material plant in Poland. Umicore has also battery-grade nickel production capacity through their battery recycling plant in Olen, Belgium. However, Volkswagen group is seeking more control and autonomy over its battery raw materials. They recently announced a partnership with Huayou and Tsingshan for the supply of nickel, cobalt with a targeted final volume of 160 GWh worth of materials. This indicates that the supply of these materials will be heavily dependent on these two Chinese suppliers that have access to vast lateritic ore resources in Indonesia. However, there are environmental and legislative concerns regarding this supply chain route that should be addressed. For instance, the RKEF process to convert Nickel Pig Iron to Matte requires substantial amount of electricity which is predominantly coal-powered in this region. Meeting the European carbon footprint targets without decarbonizing this process would be very challenging especially considering the emission related to transport from Asia to Europe. The other pathway for the laterite nickel processing would be high pressure acid leaching which also has ESG concerns regarding the tailing management.” 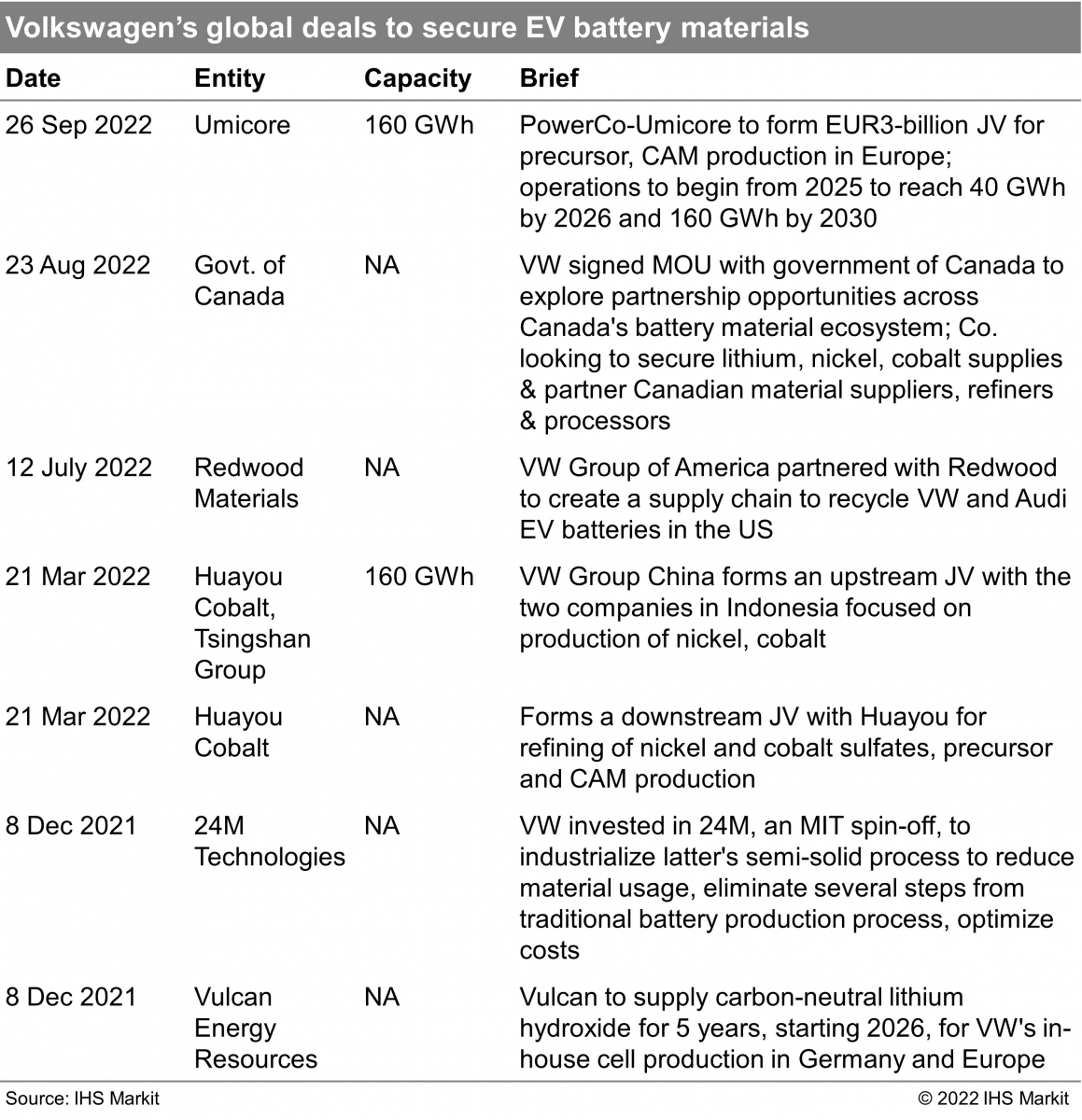 Graham Evans, Supply Chain & Technology Director at IHS Markit terms the JV between PowerCo and Umicore as a ‘landmark deal’ between one of the world’s largest OEMs, with perhaps the most ambitious BEV transition in terms of magnitude and timeframe, and a major European upstream materials market leader with significant battery recycling expertise.

“This deal comes as European Commission legislation seeks to implement rules governing the carbon footprint of battery cells from as early as July 2024 and, highly significantly, the minimum quantity of recycled raw material content from January 2030. Umicore has proven capabilities and was a first mover, certainly in Europe, in considering both the opportunity posed by electric vehicle batteries and the importance of their recycling. As such, its partnership with PowerCo seems a natural fit,” Evans said.

“Across its various product lines, Volkswagen has a huge requirement for a sustainable source of varied cathode chemistries that will position it to lead in a variety of EV segments. A strong European partner with robust environmental credentials and a proven ability to achieve scale positions it well to deliver both the product customers want and the long-term sustainability that satisfies the European mandate,” he added.

However, Evans also stressed that this represents one piece in a wider puzzle, for VW. “We understand that Volkswagen seeks to bring online 240 GWh of battery capacity across six European sites. From our forecasts, we understand that this will involve at least six major cell suppliers, as well as PowerCo, further upstream partnerships and, longer term, new battery chemistries. Such a broad technology and supply chain portfolio hedges against risk in a nascent industry. Partnering with Umicore seems a logical and solid choice in its home market.”