Out of the USD382-billion investment by chipmakers, only 6% is relevant for addressing the automotive chip shortage. The remainder is designated for AI, 5G, IoT, and other future technology challenges. 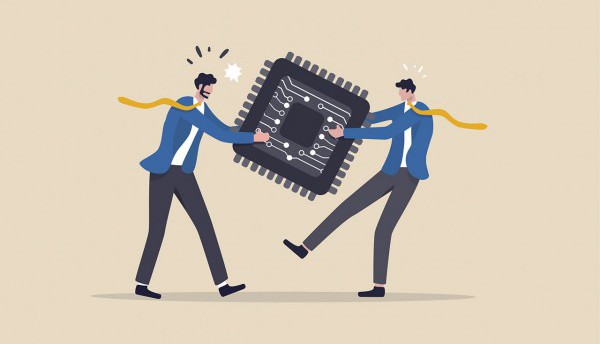 Ever since the pandemic hit last spring, there have been major inventory imbalances across the supply chain, specifically in the chip sector that has caused a global shortage of the component.

It was a chain of events that started with the pandemic that forced people to operate from home, resulting in a sudden demand for consumer electronics going through the roof. This naturally caused chipmakers to adjust their supply to focus on these markets rather than the automotive market.

How did the shortage start?

By the third quarter of 2020, with the ease of lockdown and the need for social distancing, people started buying personal vehicles. In the fourth quarter, the recovery rate of car sales and factory output followed a faster trajectory than projected across all regions. Car manufacturers, who canceled chip orders as vehicle sales fell in 2020, found themselves at the back of the queue this time. This is where the chip shortage started showing up for the first time, as a rebound in car production, plus heightened demand for chips in various sectors, had triggered a shortage.

Aggravating factors have included the cold snap in Austin, Texas, which limited supply from other major auto chip suppliers Infineon and NXP; separate incidents of a fire and earthquake in Japan have disrupted production for Renesas (supplier of 30% of MCUs used in cars); Taiwan had faced a drought; chip-guzzling 5G devices that launched during this time; new game consoles from Microsoft and Sony also launched. All of which have added more speed bumps to the already-tight chip production process.

As shortages spread from autos to smartphones and displays, semiconductors were elevated onto the agendas of governments from Washington to Brussels and Beijing. Major changes are afoot on the manufacturing side due to the governments’ initiative to set up the semiconductor industry. Overall, these plans mainly counter the concentration of chip production in Asia and offer a domestic alternative.

Therefore, various regional governments aim to provide added tax breaks for investment in key technologies with high technological and economic value, while also expanding related support on finance and infrastructure. For example, US President Joe Biden's infrastructure proposal, The American Jobs Plan, includes USD50 billion for semiconductor manufacturing and research. A bill known as the CHIPS for America Act is also working its way through the legislative process and aims to provide incentives to enable advanced research and development and secure the supply chain. The Biden administration said it is exploring options to address the global chip shortage.

Joining the US in a global race to dominate the key technology, South Korea plans to spend roughly USD450 billion to build a chip-making base over the next decade. The country offers bigger tax breaks plus KRW1 trillion (USD883 million) in loans for its local chip industry.

Similarly, European nations have committed to investing up to USD145 billion in the local design and production of advanced process technologies down to 2nm. They are also seeking to encourage greater investment from Taiwan its semiconductor firms. German Economy Minister Peter Altmaier wrote to Taiwan’s government this year asking for help to ease tight chip supplies, and Europe is also encouraging more chip production at home.

Recent investments by vendors and foundries

With politicians in many regions making noises about bringing more manufacturing onshore, major chip vendors and foundries such as TSMC, Intel, and Samsung have plans to spend tens of billions of dollars on new facilities for the next few years. For example:

Why does the automotive chip shortage continue?

The chipmakers' heftier investment budget comes as global competitors move to beef up production capacity amid a global chip shortage extending until 2022. Reasons contributing to the increasing chip demand include the trend of electrification and autonomy gaining momentum. Indeed, technology migrations in leading-edge nodes (7nm and 5nm) also appear to be accelerating to meet the demand from 5G smartphones, game consoles, and AI/GPU in cloud servers.

Being a lucrative market, chipmakers have plans to invest on in-house chip production at the 5nm, 3nm, and 2nm nodes. However, they still lack capacity increases to satisfy the demand for products built on an older standard of silicon wafers.

IHS Markit anticipates that out of the USD382-billion investment by chipmakers, only 6% is relevant for addressing the automotive chip shortage. The remainder is designated for  AI, 5G, IoT, and other future technology challenges. Indeed, the broader chip-industry shortages are for products using older technologies rather than cutting-edge technology. The most affected semiconductor component is microcontrollers (MCUs), which use old technologies (40nm to 130nm) for powertrain, chassis, safety, infotainment, and advanced driver assistance systems (ADAS)/autonomy. 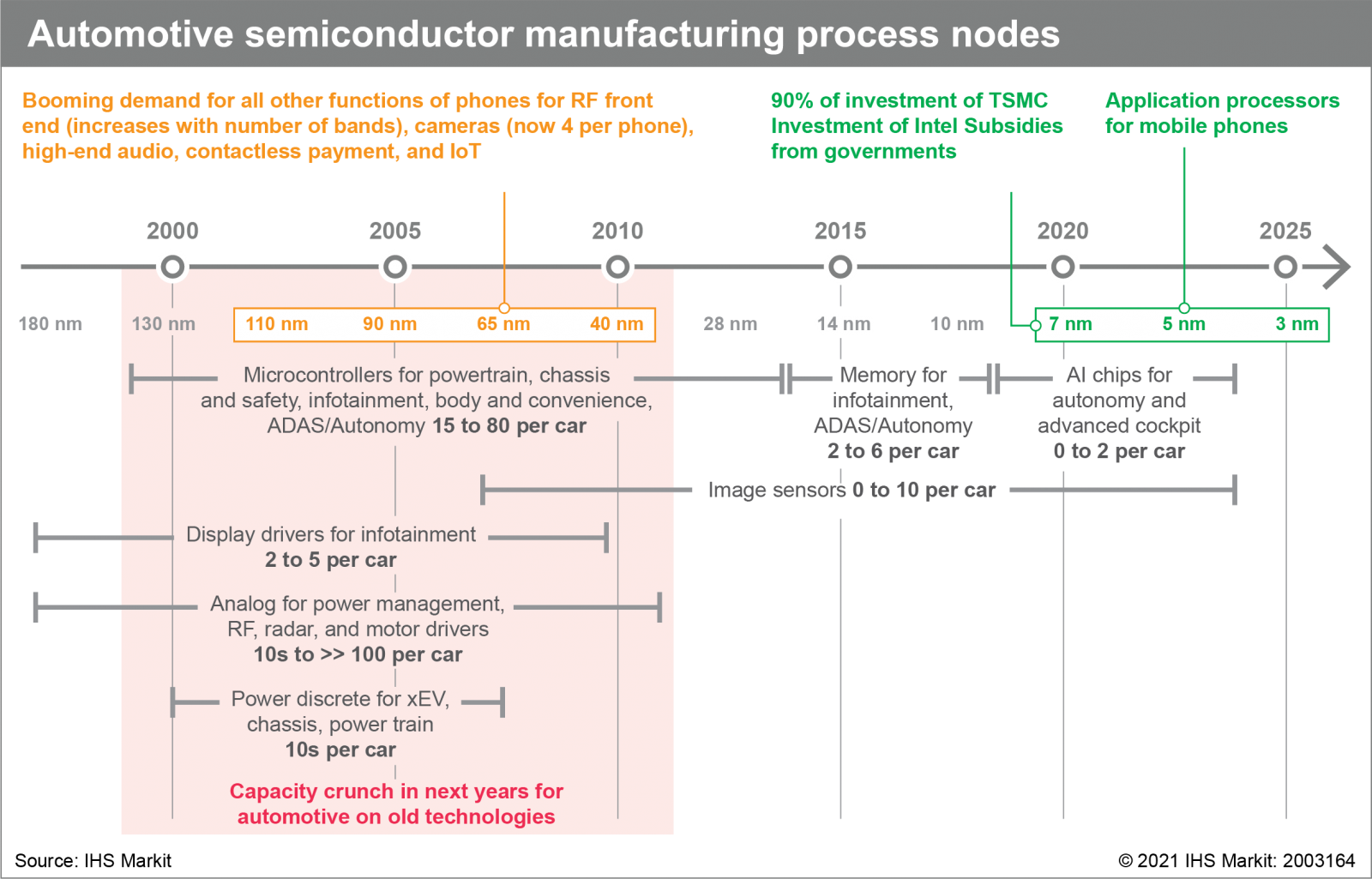 In fact, security ICs in smartphones and wearables span 40nm, 28nm, and 22nm technology platforms and support a broad range of security implementations and transaction types, including Universal Integrated Circuit Cards (UICC), ID, payment tokens, and cryptographic keys. Therefore, it is anticipated that automakers and consumer-electronics manufacturers will compete for every bit of limited manufacturing capacity.

For 2021, chip plants are already effectively running on full capacity, and chipmakers using older-generation silicon wafers are fully booked until the year-end. Over the next few months, the expected stabilization for car manufacturers will likely focus on meeting the current demand, rather than focusing on new launches. In contrast, chipmakers are gearing up for high stakes spending and the technology race.

While competition in the semiconductor industry increases, regional governments are providing grants and tax incentives to encourage global chipmakers to increase domestic capacity. However, focusing solely on domestic manufacturing may underestimate the complex and inevitably global nature of chip production.