The conflict in Ukraine aggravates sourcing of critical battery raw materials leaving carmakers and consumers exposed to substantial price increases as the industry seeks to electrify.

Russia’s invasion of Ukraine may exacerbate price pressure on critical battery raw materials and result in less affordable EVs, with battery input costs increasing by over 7,000 USD for several popular models.  Prices of lithium, nickel and cobalt, which can represent some 27% of the total battery input costs for certain battery chemistries, had already been sustained over the last few months, due to increased demand from the automotive sector, particularly in China, and low inventories. Nickel, cobalt and lithium prices had already increased respectively by 36%, 125% and 750%, between January 2021 to January 2022. Marked volatility and a general upward price pressure has increased for several commodities since the start of the conflict in Ukraine.

Few commodities have seen a further rise from already elevated price levels like nickel. On March 8th the three-month contract for this commodity at the London Metal Exchange (LME) traded at $101,365 per metric ton, a record which is about double the May 2007 record of $51,800. Such spike also led LME to halt trading given the special circumstances that surrounded such event, reportedly a short covering position from one of China’s leading producers. Nickel prices dropped to about $80,000, which is still 177% higher than its price on Monday 7th of March, before trading was halted.

Tensions around nickel price had increased as one of the many unexpected economic consequences of Russia’s invasion of Ukraine. While Russia accounts for only about 4% of global refined nickel production in 2021 and has seen its market share being eroded by the growth of exports from Indonesia, it remains a major supplier of high grade (class 1) nickel, which is critical for EV applications. Russia accounted for 13% of global production of such nickel grade in 2021 according to IHS Markit. Russia is also home to  Norilsk Nickel, the world’s largest high grade nickel and palladium producer, approved to deliver metal into both LME and Shanghai Futures Exchange (SHFE).

Norilsk Nickel’s fortunes have become in recent years increasingly intertwined with the automotive industry’s electrification drive. Back in 2018 BASF of Germany has for example set up a plant to manufacture cobalt and nickel for automotive battery applications in Finland next to Norilsk Nickel’s metal refinery and secured long-term supply agreement. While there may not be direct sanctions on Norilsk yet, BASF has announced it will not sign new agreements with Norilsk in light of Russia’s invasion and several stainless steel manufacturers have hinted that they are attempting to diversify their supplies away from Norilsk. All of this has made markets more nervous about the prospect of sanctions creating further price pressure on already over-stretched capacities.

However, nickel has become increasingly popular among battery manufacturers and carmakers as a substitute of cobalt, an expensive material with high ESG (Environmental Social Governance) concerns. Depending on the cathode chemistry, a battery electric vehicle may have anywhere between 40 kg to 80 kg of nickel. This has driven a structural demand expansion which has been supporting nickel prices as well as those of cobalt and lithium. As of March 8th the price increases of nickel, cobalt and lithium vs. January 201 stood at 134%, 145% and 775% compared to January 2021 prices.

To put matters in perspective the Automotive Supply Chain and Technology team has calculated the impact on battery manufacturing input costs from increases in these three critical commodities, leveraging our Energy Storage Device intelligence and market pricing information. We have selected four different cathode chemistries to better illustrate the relative exposure to raw material price increases with a focus on lithium, nickel and cobalt. Given the relative momentum of raw material prices, it is apparent that nickel-rich chemistries such as those pursued by Mercedes in its flagship EQS (NCM 811, meaning a ratio of 8 of nickel, 1 of cobalt and 1 of manganese) would face a more substantial cost increase, in the EQS’s case by nearly 11,000 USD, given the vehicles generous battery pack vs. 2021 prices. However also a high volume vehicle like the Tesla Model Y, of which IHS Markit expects some 700,000 units to be made in 2022, would record battery raw material input increases of nearly 8,000 USD, with a potential impact in excess of 5.5 billion USD to Tesla’s bottom line unless the automaker decides to alter its prices.

In the short-term, unless covered by long-term supply agreements or hedged, these price increases will swiftly impact OEMs’ profitability. There is growing evidence that carmakers are already exploring ways to pass onto these increases to consumers. For example only last week Rivian had revealed its intention to increase the base price for its quad-motor R1T truck and R1S SUV by respectively $12,000 and $14,500 in light of increased input costs and that this would also impact customers who had already pre-ordered the vehicles, only to backtrack on the latter part of this policy due to social media backlash.

As pointed also by the International Energy Agency in its annual outlook report, “if both lithium and nickel prices were to double at the same time, this would offset all the anticipated unit cost reductions associated with a doubling of battery production capacity.”  It’s clear that at current prices, we will see, at a minimum, any price reduction linked to batteries’ economies of scale wiped out by increased input costs. It is also clear that should these elevated price levels continue into 2023 and beyond, the likelihood of a delay of the tipping point for ICE vs. BEV cost parity, a critical metric to measure battery electric vehicle adoption, markedly increases. These price increases add over $50 per kWh on popular battery configurations, something that cannot be easily recovered through better packaging alone and improved cell-to-pack design,  thus having several impacts on OEMs’ electrification plans.

However it is important to contextualize these price increases and  avoid jumping to conclusions. Both cobalt and nickel have a track record of significant price volatility and prices may fall in the coming weeks, particularly in the scenario of a resolution of the conflict in Ukraine. For reference cobalt prices had risen in March 2018 to $93,000 USD per ton only to fall to about $23,000 USD the following year, which forced Glencore to close its Mutanda mine in DRC. Nickel has certainly recorded robust demand that drove prices upwards, but prices have also faced sudden collapses at every announcement of new supplies, for example  in early March 2021 when Chinese nickel specialist Tsingshan announced it had signed agreements to provide 100,000 tons of nickel matte to Huayou Cobalt and battery materials maker CNGR Advanced Material by October 2022 from its Indonesian operations. This event alone triggered a 16% drop to 15,000 USD per ton. The economic cycles surrounding nickel, lithium and cobalt demand and supply are far from stable, even when putting aside geopolitical events like the war in Ukraine or the EV transition push in several corners of the world. 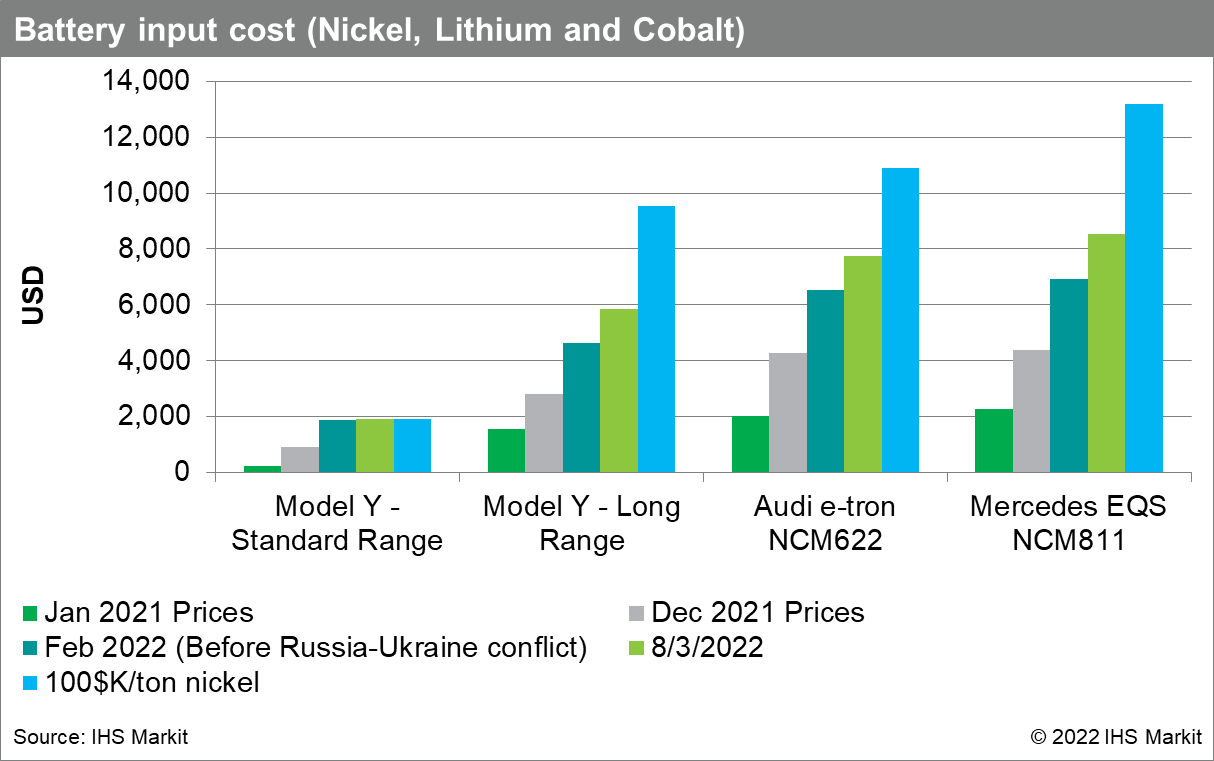 LFP as a winner?

The new raw material pricing environment, if it persists, could result in OEMs having to make different battery chemistry choices. LFP (Lithium iron phosphate)-cathode batteries would stand to gain further competitiveness in the market should nickel and cobalt prices continue to stay elevated. From our analysis, they would still record a substantial increase (for example $1,694 on the Tesla Model Y standard range), however this is marginal compared to the $4,325 of the equivalent vehicle featuring a nickel and cobalt chemistry (Long-range version). LFP chemistry was initially favoured by Chinese manufacturers BYD and CATL as a low cost alternative to nickel and cobalt-rich chemistries as it does not contain these materials. It also provided benefits in terms of durability and thermal safety. Chinese manufacturers hold a virtual monopoly on this technology thanks to key patents registered by a consortium of Chinese academic research institutions which agreed with local battery manufacturers to forego licensing fees provided these batteries were only produced in China. However such patents will start expiring in 2022, giving an opportunity to non-Chinese manufacturers to grow into this technology.

LFP chemistry has been embraced by other carmakers outside China including Tesla and Volkswagen. Volkswagen has claimed it may use LFP for up to 30% of its battery electric vehicle portfolio, while Tesla is using LFP on its Shanghai-made models sold locally and in part in Europe. One major downside of LFP technology is the energy density that is anywhere between 25-35% lower other mass production alternatives, meaning that range will be reduced or additional cells are required to reach equivalent range. This forced OEMs to pursue ever clever ways to increase cell density in the battery pack, for example more sophisticated cell-to-pack approaches that increase energy density (by 30% and potentially more over time). A good example is BYD’s blade design, in which 60% of the battery pack’s volume is taken by cells vs. 40% in other high volume battery packs.

Elevated levels of nickel and cobalt prices would necessarily result in OEMs pursuing iron-rich chemistries for a broader portion of their portfolio and double-down efforts to extract range with optimized cell-to-pack designs. Tesla for example may decide to pursue LFP more vigorously by leveraging its 4680 cell (a new tabless cylindrical cell in a much bigger format than current cells) which, combined with structural packs, could result in a greater portion of its volume to be covered by LFP. Volkswagen on the other hand may think to expand LFP usage beyond that 30% it is aiming to use should the current pricing environment for nickel and cobalt continue to persist. This could boost LFP penetration in the light vehicle segment beyond the 15% level we currently forecast for 2030 (in GWh).