With an improving outlook for semiconductors in the US and mainland China, General Motors expects 2022 results to remain strong 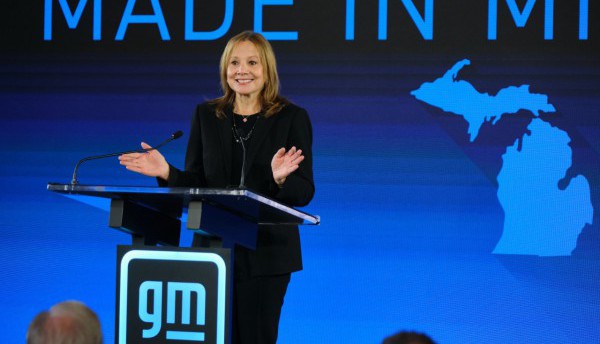 Addressing the shareholders on the sidelines of the full fiscal year (FY) 2021 and fourth quarter financial earnings on 1 February 2022, General Motors’ (GM's) chairperson and CEO Mary Barra said that she is confident of the company’s profitable turnaround as it scales up production capacity and readies to roll out more electric vehicles (EVs) in 2022. Referring to GM’s strategy, which involved the carmaker going all-in to build an electric and autonomous vehicle ecosystem, she said that the company is expanding the scale, scope, and profitability of its business.

“With an improving outlook for semiconductors in the U.S. and [mainland] China, we expect our 2022 results will remain strong. We expect our EBIT-adjusted earnings to remain at or near record levels in the range of USD13 billion—USD15 billion, all while investing more year-over-year in our growth businesses like Cruise, BrightDrop and our rapidly accelerating portfolio of EVs,” Ms. Barra said, adding that with Ultium-based EVs beginning to roll out and Cruise on the cusp of generating revenue, the door is opening to a more sustainable, equitable future for all of GM's stakeholders.

Complimenting GM’s in-house developed Ultium platform, which is built using a high-energy, low-cost battery cell, a modular EV architecture and component set, Barra pointed at the first deliveries of the GMC Hummer EVs and the BrightDrop EV600 cargo vans to its customers recently.

“These two products couldn’t be more different despite sharing Ultium DNA, which underscores the industrial and financial strength of our strategy,” Ms. Barra underscored, justifying why the company has committed billions of dollars to develop the Ultium platform.

“Now, backed by consistently strong financial results, including [the] record EBIT-adjusted USD14.3 billion in 2021 and the overwhelmingly positive customer response to other Ultium vehicles we have shown so far, like the Chevrolet Silverado EV, the Cadillac LYRIQ and the Chevrolet Equinox EV, we are accelerating our plan,” Ms. Barra said, referring to the company’s recent investment announcement of USD7 billion on expansion of battery cell and EV assembly capacity across facilities in the US.

Updating on initial booking numbers, Ms. Barra said that while customer response to the Hummer EV pickup has been overwhelming, GM has already received reservations for more than 110,000 units of the Silverado EV pickup, including reservations from more than 240 fleet operators. The company had revealed the Silverado electric pickup at the CES 2022 last month.

On the commercial delivery van side, Ms. Barra updated that the company has received more than 25,000 reservations for BrightDrop cargo vans so far. “Some of the world’s largest fleet customers, including FedEx Express, Merchants Fleet, and Walmart, are adopting BrightDrop’s electric vehicles and technology to make their delivery operations more efficient,” she said.

Moreover, Ms. Barra said GM is witnessing strong customer interest in the recently revealed all-electric Cadillac Lyriq SUV, which is the next Ultium-based EV the company plans to launch. “The customer interest in the LYRIQ is now so strong that we will forgo a new round of reservations and begin taking customer orders soon after the Debut Edition launches in March,” Ms. Barra updated the shareholders in her letter.

GM has also lined up the launch of its compact electric SUV—the Chevrolet Equinox EV, which should be rolled out later in 2022 with an estimated price tag of around USD30,000. “The efficiencies created by the Ultium platform are a key reason why we can deliver truly affordable EVs like the Equinox. It’s a part of the market that startups aren’t targeting in North America. But I believe affordable EVs are key to driving mass-adoption of EVs, which is a national and global priority,” Ms. Barra said.

Significance: Since 2020, GM has announced investments of more than USD14 billion in 10 facilities across North America, aimed at establishing a manufacturing capacity to produce more than one million EVs per annum by the end of 2025. According to the company, these investments aimed at EV capacity creation are key for GM to achieve its plan to become carbon neutral across its global products and operations by 2040. Some of the recent milestones include:

a) GM opened Factory ZERO in Detroit and Hamtramck in late 2021. The site is also the first plant dedicated to Ultium products, including the Hummer EV. At the same time, GM is also converting other plants, with EV production in Tennessee and Canada beginning this year, and a plant in Mexico coming online next year.

b) GM is converting a plant in Orion Township, Michigan, to EV truck production, with a total capacity of 600,000 units of EV truck capacity in North America by the end of 2025.

c) Ultium Cells, GM’s joint venture with LG Energy Solution, has recently announced its third battery cell plant in the US, which will be in Michigan. “These cell plants will be backed by a strong, North America-focused supply chain for raw materials, including lithium, Cathode Active Material and more,” she added.

Ms. Barra also touched upon the other growth platforms and changing business model, apart from EVs. “We are investing aggressively in growth platforms and changing our business model to increase recurring revenue streams over the life of each vehicle we build. Alongside Ultium, we will leverage our Ultifi software platform and new businesses like CarBravo, our new all-brand used-vehicle platform, OnStar Insurance and GM Defense to drive innovation and create new markets that we believe will help us double our annual revenue by 2030 with expanded margins,” she said, adding that Cruise is taking big steps toward commercializing its autonomous rideshare service.

According to the GM CEO, the Cruise team members have been taking fully driverless rides in San Francisco since November to demonstrate and refine the software and hardware ecosystem. The team working on self-driving technologies has already logged over 20,000 miles and completed more than 600 trips.

“I rode in a driverless Cruise a couple of weeks ago, and it was incredible. The ride is smooth and confident. It’s like having an experienced and attentive driver behind the wheel,” she said, adding that the Cruise should generate USD50 billion in annual revenue by the end of the decade.

“It also means that the SoftBank Vision Fund will invest, as planned, an additional USD1.35 billion in Cruise. This is another strong vote of confidence in the Cruise team, its technology and services.”