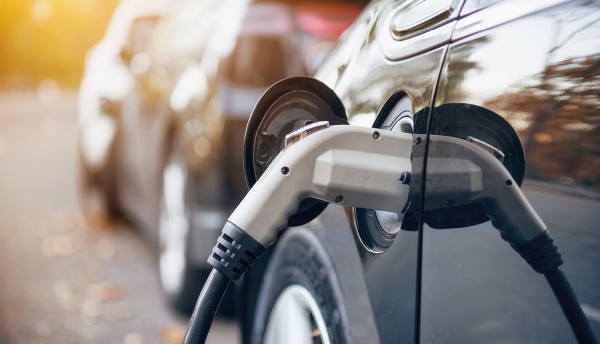 The recently concluded 2018 Beijing Motor Show gave the world a peek into what OEMs have planned for the Chinese market in the electric vehicle (EV) segment. A big chunk of the automakers at the show presented their new EVs, some of which were world premieres. Not only did automakers display their products at the show, some of them also announced their EV product launch plans specifically for the Chinese market, underlining the growing importance of this market for the automakers.

The focus on China does not come as a surprise, as China is the biggest market for EVs and is expected to grow at a significant rate in the foreseeable future as well. The strong demand for EVs is not the only reason automakers are making fresh plans for China. Policies have started becoming friendlier toward foreign automakers, giving a much better platform for them to compete with local players.

Although China has been the most prospective country for EVs, protectionist policies have kept foreign automakers at a disadvantage, compared with local players. However, with the demand for EVs increasing at a searing pace, there is a need to bolster the supply side as well, which has led the Chinese government to ease up certain policies in order to allow a relatively easy entry into the country. Most recently, China announced that it will completely remove the foreign ownership cap on automotive companies from 2022. For companies manufacturing plug-in hybrids and electric vehicles, the change is applicable from 2018 onward, and for commercial vehicle makers from 2020.

It will be interesting to see if traditional automakers will go it alone in China in the future, or continue with their well-established joint ventures (JVs). Volkswagen (VW) recently said that it was planning to produce EVs at six locations across China by 2021 and, along with its JV partners, invest EUR15 billion (USD18.4 billion) in e-mobility, autonomous driving, digitalization, and new mobility services in China. “As the world’s biggest automotive market, China plays a prominent role across all group brands. The strong bond with our joint ventures and business partners will remain. We are accelerating to make mobility cleaner, safer, and more intelligent to really improve people’s lives. We will be starting local production of battery-electric cars in at least six factories by 2021 in China,” said Dr. Herbert Diess, chairman of the board of management and CEO of Volkswagen Group.

Nevertheless, China’s new policy move is good news for those EV start-ups that may be looking at playing a bigger role in the world’s largest EV market by setting up shop there. The companies will no longer have to share control or technology with Chinese players, and will be able to price their cars competitively. Tesla would be one of the players to gain significantly from the move. The American EV maker has been looking to step up its manufacturing presence in China. There have been reports that Tesla is looking to set up a gigafactory for manufacturing cars and batteries in China, and has already opened a research and development (R&D) center in Beijing. Earlier this month, Tesla reportedly set up a new wholly-owned company in China, named Tesla (Shanghai) Co Ltd. Located in southeast Shanghai within the free-trade zone, the new company is expected to focus on electric cars, spare parts, and  the battery business.

Last year, China’s Ministry of Industry and Information Technology (MIIT) also deferred the proposed new energy vehicle (NEV) quota by a year to 2019. Under the new ruling, from 2019 onward, automakers who have annual vehicle production or imports of more than 30,000 vehicles, will have to secure credits from sales of NEVs equivalent to 10% of their total sales in China, and 12% by 2020. Automakers can also carry forward, buy, and sell credits, if they are unable to meet the targets or exceed them. To meet the targets, many OEMs have announced plans to increase production of electrified vehicles.

With very low or even negative margins, manufacturing EVs is still a costly affair for automakers. The high cost of battery and other components makes low-scale production a loss-making pursuit. However, with the fuel emissions standard tightening, it is getting harder to comply with the norms with just pure internal combustion engine (ICE) vehicles, thus necessitating the transition toward EVs.

To break even, sooner rather than later, it is important to reach a mass scale of production for EVs, which has led automakers towards China, which sells more than half of the world’s electrified vehicles every year. In 2017, nearly 777,000 electrified vehicles were sold in China (according to the China Association of Automobile Manufacturers, or CAAM), out of reportedly 1.2 million plug-in EVs globally.

Some of the top OEMs have announced dedicated EV model plans for China, with the aim of reaching a big enough scale that will allow them to support the EV programs in other parts of the world as well, where adoption rate is still low. Recently, Toyota announced that it plans to launch 10 NEVs in China by the end of 2020. This will include plug-in hybrid electric vehicle (PHEV) versions of Corolla and Levin passenger cars in 2019 and a battery electric vehicle (BEV) model based on its C-HR/IZOA compact SUV in 2020. Toyota unveiled the PHEV versions of the Corolla and Levin at the 2018 Beijing Motor Show in China this week. Toyota has already announced that it will begin producing PHEV variants of the Corolla and Levin in China in 2019, marking Toyota's first overseas production of PHEVs. The company also said that it was looking at increasing local production of electric motors (powertrain components), batteries, inverters, and other electrified-vehicle core technologies in China. The company will open a new battery testing facility at Toyota Motor Engineering & Manufacturing (China) Co., Ltd. (TMEC), which is Toyota's R&D center in China, for evaluating battery packs for electrified vehicles. The company will also increase the annual production capacity for nickel–metal hydride battery modules at Sinogy Toyota Automotive Energy System Co., Ltd. (STAES) and Corun PEVE Automotive Battery Co., Ltd. (CPAB) to 220,000 units in 2020.

Last year in December, Ford also announced that it would launch 15 electrified vehicles under the Ford and Lincoln brands by 2025. Ford has said that it also plans to assemble its first global all-electric small sport utility vehicle (SUV) in China in 2019. “China is not only the largest car market in the world, it’s also at the heart of EV and SUV growth and the mobility movement. The progress we have achieved in China is just the start. We now have a chance to expand our presence in China and deliver even more for customers, our partners, and society,” said Bill Ford, executive chairman of Ford.

Another American automaker, General Motors, said in 2016 that it would launch 10 NEVs under the Chevrolet, Buick, Cadillac, and Baojun brands as part of its five-year growth strategy for China. By 2020, the company hopes that it will be able to sell 150,000 NEVs a year, which will grow to 500,000 by 2025. China itself has not held back its projections for NEV sales. The Chinese government expects sales of NEVs to reach 2 million a year by 2020. If you consider the nearly 10x growth in NEV sales over the last four years, the target may seem relatively easy to touch. In 2014, China sold just over 74,000 NEVs, according to CAAM. 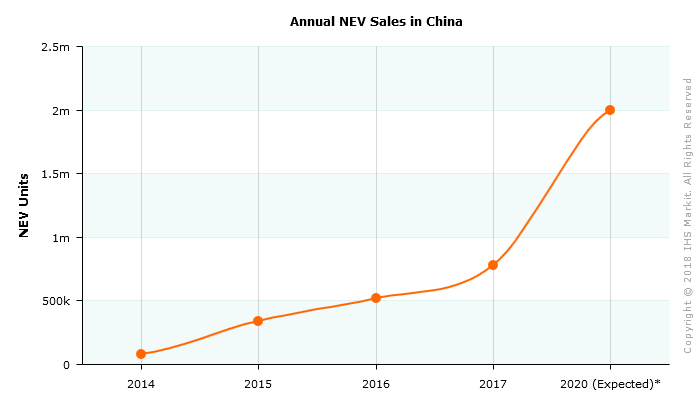 However, the biggest push among the foreign automakers could come from VW. Since the diesel emission issue came to light in 2015, VW has made a conscious effort to expand its EV portfolio in a bid to gain leadership positions in alternative-powertrain vehicles in different regions around the world. Under the Roadmap E initiative, VW has said that it will invest nearly EUR20 billion in electromobility until 2030, a big chunk of which could make its way to China. It has been reported that VW and its JV partners are planning to produce as many as 40 new electric and hybrid vehicle models in China by 2025.

Gone are the days when automakers launched vehicles in their home markets first and then modified or renamed them for different markets accordingly. Now, China has become the first-priority market for many automakers, including Honda and Renault, to launch their new EVs.

It was at the 2017 Shanghai Motor Show that Honda first announced its plans to launch a China-exclusive EV, along with its JV partner GAC. The car is expected to go on sale sometime in 2018 and will be introduced under the brand names of both GAC Honda and Dongfeng Honda. The Japanese automaker has also partnered with Neusoft, an IT company based in China, for the EV. Neusoft will develop technologies in multiple areas, such as battery management, cloud management of vehicle data, and connectivity.

Renault has also announced that it is developing a low-cost EV for China, which will be based on its entry-level hatchback Kwid. Expected to be launched in 2019 in China, it is hoped the car will make its way to other growing markets later, including India.

A change in policy towards easing NEV production and sales in the country will only strengthen China position as the world’s largest market for electrified vehicle in the years ahead.